Biosecurity Solutions for the Prevention of African Swine Fever

African swine fever (ASF) is a highly contagious haemorrhagic viral disease that can be fatal to pigs and wild boar. It is responsible for serious production and economic losses.

This transboundary animal disease can be spread by live or dead pigs (domestic or wild) and processed pork products. Furthermore, transmission can occur via contaminated feed and fomites such as shoes, clothing, vehicles, knives, and equipment due to the high environmental resistance of the ASF virus.

There is no approved vaccine against ASF unlike classical swine fever (Hog Cholera), which is caused by a different virus and which has a totally different epidemiology. Historically, outbreaks have been reported in Africa and parts of Europe, South America, and the Carribean.

More recently, since 2007, the disease has been reported in multiple countries across Africa, Asia and Europe, in both domestic and wild pigs. ASF is a disease listed in the World Organisation for Animal Health (OIE) Terrestrial Animal Health Code and must be reported to the OIE.

ASFv can spread according to different transmission routes:

A middle-sized virus with a complex structure

The ASF virus is a double-stranded DNA virus belonging to the unique species African Swine Fever virus, the genus Asfivirus and the family Asfarviridae.

Several geneotypes (22) of the species have been identified and the virulence differs greatly from one isolate to another. The extracellular envelope has a diameter varying between 175 and 215 nm. The ASF virus is larger in size compared to other virus species which measure less than 50 nm. 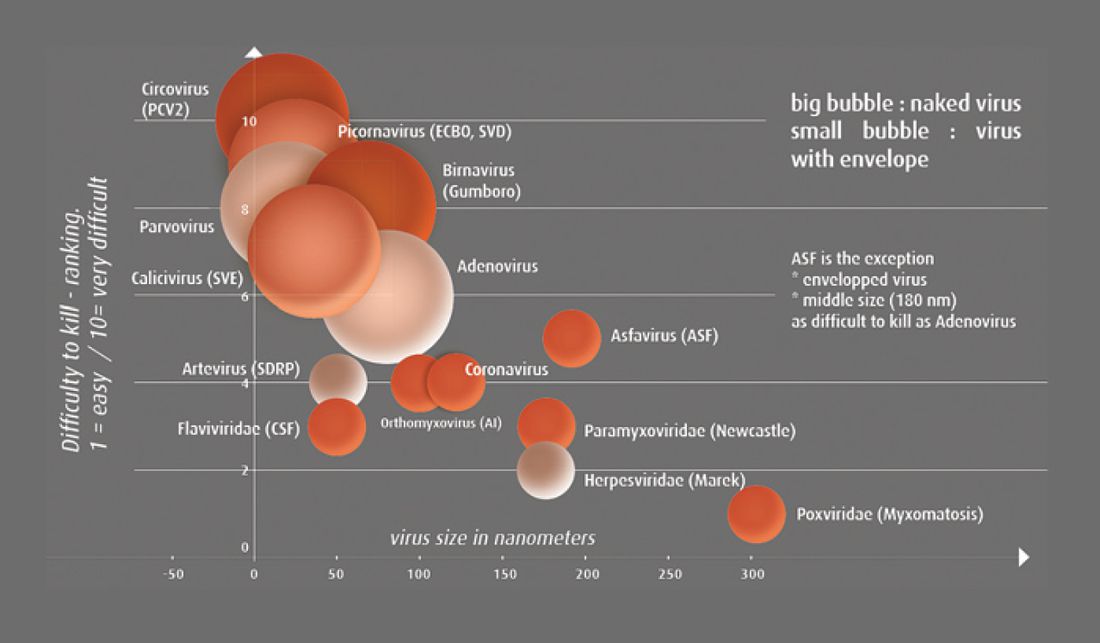 The viral capsid is an icosahedral structure of capsomeres surrounded by a lipidic outer layer, qualifying the virus as enveloped. This outer layer is crucial for the virus infectivity.

A virus very sensitive to disinfectants

Considering the biosecurity measures to implement, it is a real advantage that ASF belongs to the group of enveloped viruses, as this group is much more sensitive to disinfectants compared to viruses without an envelope (qualifying as naked), especially if they are small. That is why the virucidal activity of disinfectants is tested, in Europe, on a reference virus: ECBO (Cytopathic Bovine Orphan virus), which is a small, naked virus (27 nm), both easy to cultivate in vitro and highly resistant to disinfectants.

ASFv is resistant and persistent in the environment. Some strains not only survive but also remain infectious across a range of pHs between 4 to 13.

Different studies report virulent activity for ASFv strains stored for more than five years at 5˚C, for 18 months at 20˚C and between 10 and 30 days at 37˚C. The virus can survive in soils or animal faeces for 5-6 months and up to 30 months in chilled meat. Nevertheless, it is inactivated at a temperature of 60˚C applied for 30 minutes.

In general, we can observe that the resistance and survival of enveloped viruses such as ASFv is much higher based on temperatures below 10˚C compared to higher temperatures (above 20˚C), in the environment or when exposed to disinfectant treatment.

Biosecurity measures should be used to prevent pathogen contamination from outside to the production site. There is currently no vaccine against ASF and there are no treatments available. The fight against the disease relies on biosecurity measures and strict management; avoiding the spread of the virus from infected animals or endemic areas (strict animal imports and monitored transportation).

If a case is reported, establish an emergency procedure for hazardous areas including:

As observed in Europe and in some regions of Asia, the transmission of ASF seems to depend largely on the wild boar population density and their interaction with low-biosecurity pig production systems, alongside the contamination by food waste caused by human interaction. Good management of the wild boar population, biosecurity knowledge and coordination among the veterinary services, wildlife and forestry authorities in waste management will all help to successfully prevent and control ASF.

This article originally appeared in International Pig Topics Vol 34 No 8.

Eradication of Swine Dysentery via Biosecurity and Medication

Preparing For ASFv: An 'Enveloped Virus'