How to Manage Infections with Actinobacillus Pleuropneumoniae

This article appeared in International Pig Topics, Volume 37 No 3

The associated pleuritis has a prolonged, unfavourable effect on the technical performance and profitability of pig herds. Therefore, this ubiquitous pathogen is still one of the most important respiratory pathogens in pig farming today, and has a significant impact on animal welfare.

Correct diagnosis is crucial and is based on clinical symptoms and subsequent laboratory analysis. Different case specific options to manage App infections can be taken into consideration.

Actinobacillus pleuropneumoniae is a Gram-encapsulated bacterium which mostly affects fattening pigs between nine and 17 weeks of age. Subclinical infections often occur, resulting in a high percentage of seropositive herds worldwide. Two biotypes and 16 serotypes are described. Typically, the pathogen has several virulence factors which play a crucial role in the pathogenesis:

Although the pathogen can be transmitted by the airborne route, the disease is transmitted principally by direct contact from pig to pig. After infection, animals can remain asymptomatic carriers for several months. The pathogen mainly survives in the tonsils, but can also be found in lung lesions and the nose. Subclinically infected carrier pigs are the main cause of App dissemination. Logically, purchase of subclinically infected animals is a high risk to introduce App or new strains of App into a pig herd.

Multiplication of App bacteria often occurs after transport, mixing, inappropriate climate control and other stress factors. The more virulent strains are primary pathogens, meaning that no other pathogens are needed to initiate infection. Obviously, co-infections with other respiratory pathogens like Mycoplasma hyopneumoniae aggravate the clinical symptoms. Relapses after initial outbreaks often occur if the disease is not controlled properly.

Peracute and acute outbreaks of App are characterised by high morbidity and mortality even in a few hours. Morbidity can be as high as 100% but usually varies from 30 - 50%. 5 - 10% mortality is often observed. Affected pigs suffer from laboured respiration, mouth breathing and high fever up to 41.5oC.

A sudden drop in feed intake is noted and pigs are reluctant to move. The gross pathologic lesions are characterised by severe haemorrhagic, necrotising pleuropneumonia with involvement of the diaphragmatic lung lobes. The pneumonic areas are dark and solid and fibrinous pleurisy is present.

Often, bloody discharge from the mouth and nose is observed. Diagnosis can be based on the typical clinical signs, farm history and bacteriology. Antimicrobial susceptibility testing is performed on the obtained culture and serotyping is performed by PCR testing.

Chronic forms are observed after acute outbreaks or in case of infections with less virulent strains. Clinical symptoms may be chronic coughing, dyspnea, decreased feed intake and a lack of batch homogeneity. Chronic infections mostly have a subclinical character. However, they have a detrimental impact on technical parameters like average daily weight gain and feed conversion rate.

Slaughterhouse checks reveal a high percentage of adhesive pleuritis which can be evaluated by lung scores. The infection dynamics can be investigated by serological profiles of the Apx toxins and the antigen presence by PCR testing. Gilts are often subclinical carriers and can infect the progeny at an early stage during the lactation period.

The incidence and impact of App infections in the field can be reduced by several preventative measures (Table 1). Special attention should also be paid to external (avoiding the introduction of the pathogen) and internal biosecurity (reducing the risk of further spreading within the farm). 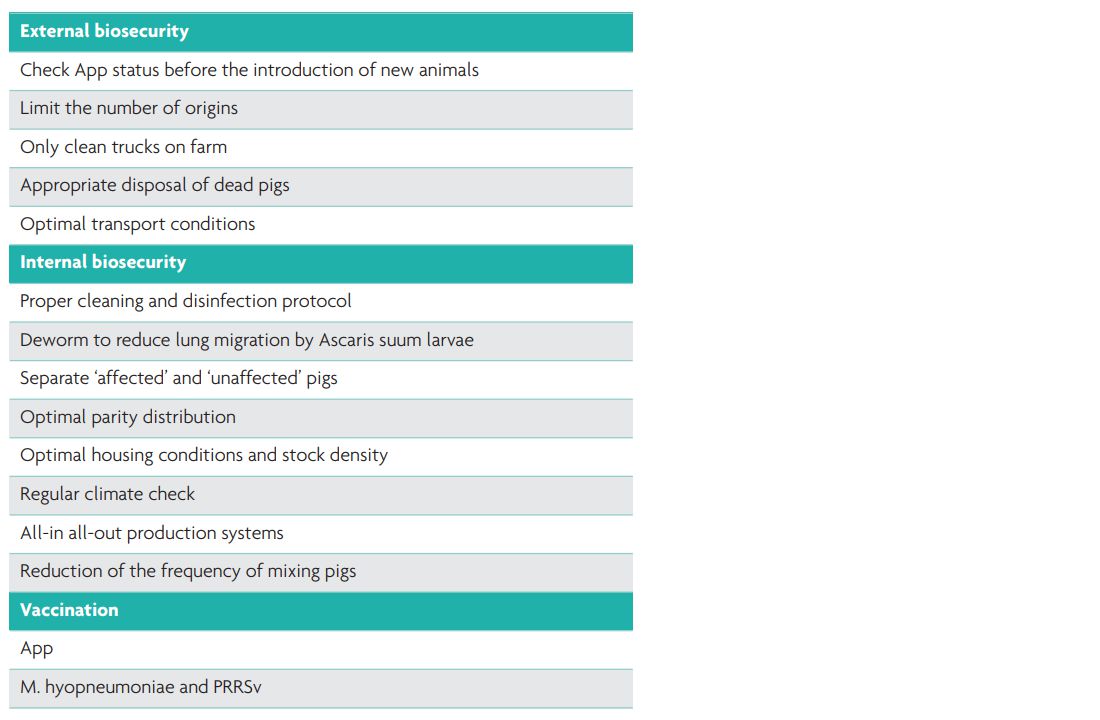 Reports from the field indicate that the efficacy is doubtful and adverse reactions like fever and lack of appetite may be observed. Vaccine efficacy may be reduced by direct 'injection' of Apx toxins in the respiratory epithelium cells.

Furthermore, the presence of maternally derived antibodies should be taken into consideration to determine the optimal timing of a double vaccination programme. To ensure maximal efficacy, the second dose should be infected 2-3 weeks before the expected onset of the disease.

Despite these preventative measures, curative intervention with antimicrobials is still required. For peracute and acute outbreaks, early antimicrobial treatment programmes with effective antibiotics should be implemented immediately to restore general health status. Injection of an antimicrobial compound (like beta-lactam antibiotics, tulathromycin, florfenicol) is highly recommended when feed and water intake is substantially decreased.

Often, anti-inflammatory products are administered simultaneously. In water, treatment can be started immediately, which makes it the most suitable and flexible administration route as sick animals continue to drink when feed intake drops.

Following medication start via the drinking water and in chronically infected herds, App infections can also be controlled by in-feed treatment.

The metaphylactic use of oral antimicrobial products or long acting injectable antimicrobials (tulathromycin, tildipirosin) can be recommended at one or more critical time points (for example, after transfer). This predictability is attributable, in large part, to management practices and environmental factors that can vary at each location. The clinical outcome of App treatment depends on three crucial steps in the decision process of the veterinary surgeon.

Considering the known or expected antimicrobial susceptibility (pharmacodynamics) and the ability of the antimicrobial to sufficiently reach the affected lung tissue (pharmacokinetics).

Often, treatment should not be delayed due to the seriousness of the disease and welfare implications. The expected susceptibility can be based on surveys of the antimicrobial sensitivity of App in specific areas, the farm history and the expertise of the farm veterinarian.

This might help to start an empirical treatment before laboratory reports on case specific susceptibility testing are available.

Based on the quality of the active substance (crystal form and size, impurities, undesired substances), the salt form and an appropriate formulation (used excipients and type of formulation). The antimicrobial potency and bio-availability of the active ingredient and the solubility and stability of a veterinary drug is determined by the product choice. All these factors contribute to the efficacy and ease of use of the chosen product.

Dosing should be expressed in milligrams per kilogram bodyweight, independently of the application form. Responsible use of antimicrobials is key.

Choice of the active substance

Minimum inhibitory concentration (MIC) test results together with the knowledge of pharmacokinetic features of antibiotic drugs are the basis for selection of the most appropriate antibiotic for respiratory treatment use (Table 2). Several active compounds are successfully used to treat App infections.

Typically, tilmicosin (Tilmovet) accumulates in the lower respiratory tract (tracheobronchial epithelium / serum ratio 43: 1) and mainly intracellularly in the alveolar macrophages (macrophages / serum ratio 184:1). These immune cells act as a vehicle to carry tilmicosin to the infection site where the active is slowly and sustainably released, even for a prolonged period after treatment ceases.

This macrolide demonstrates not only a unique pharmacokinetic behaviour, but also has a broad spectrum activity against several respiratory infections, including App, Mycoplasma hyopneumoniae and Pasteurella multocida. Clinical breakpoints for tilmicosin are officially determined by the Clinical and Laboratory Standards Institute, enabling correct MIC value interpretation and evaluation of tilmicosin activity against App (resistance ≥32 μg/ml).

Therefore, tilmicosin is the first choice product for the treatment of Porcine Respiratory Disease Complex. The excellent efficacy of medication with tilmicosin (Tilmovet) after introduction of App intra-nasally to infect pigs was examined at different dose levels in feed in a herd free from M. hyopneumoniae.

Animals were treated from 7 days before to 14 days after their introduction and compared to an infected, untreated control group. Tilmicosin exhibited strong clinical efficacy after App challenge, resulting in a return to normal respiratory function in a dose-dependent manner (Table 3, Figure 1).

Figure 1. Pigs with diverse clinical parameters for different treatment groups. Values of the same parameter without a common superscript are significantly different (p < 0.05)

App strains demonstrate excellent in vitro susceptibility to florfenicol. The lipophilic character of florfenicol results in high lung tissue penetration and a superb and rapid clinical efficacy which is of uppermost importance in cases of acute App outbreaks.

Furthermore, amoxicillin has a short withdrawal time to slaughter, making it a suitable product when pigs close to slaughter are affected by App infections. However, the solubility and stability in the drinking water play a crucial role to ensure maximal efficacy.

As mentioned above, injection of an antimicrobial product is highly recommended in the acute phase of App infections. The use of fluoroquinolones and 3rd - 4th generation of cephalosporines is restricted in some regions. Long acting macrolides like tulathromycin (Tuloxxin) have a unique chemical structure resulting in an excellent lung distribution and slow lung tissue concentration.

Subsequently, a single intramuscular injection offers a long duration of effectiveness against several respiratory pathogens. Tulathromycin injection may provide up to 9 days of protection against death and severe morbidity caused by App and is therefore also another option for metaphylactic use.

App infections are sometimes not fully controlled by biosecurity, vaccination and medication. In these cases, eradication can be taken into consideration. The success rate of App eradication largely depends on the correct implementation of the protocol. Newly introduced animals should be certified free from App.

Total depopulation and repopulation of a sow herd has an enormous impact on the cash flow and the maintenance of the herd's parity profile. Partial depopulation combined with strategic medication and strict biosecurity measures, including hygiene and disinfection, also results in successful App eradication. Therefore, older and poor performing sows and all fatteners and gilts below 10 months of age should be removed from the herd by selling the piglets at weaning and finishing the growers and fatteners on another location.

The remaining sows and gilts are medicated with tilmicosin (Tilmovet) at 16 mg/kg bodyweight for four consecutive weeks and the piglets born during this period are injected weekly with tulathromycin.

This protocol improves the health status and technical performance and reduces antibiotic dependence substantially. The results of such an App eradication programme in the field are shown in Figures 2, 3 and 4.

Figure 2. Mortality rate before and after the implementation of an App eradication programme based on partial depopulation in combination with the use of tilmicosin in sow feed and tulathromycin injection of the suckling piglets

Figure 3. Days to slaughter before and after the implementation of an App eradication programme based on partial depopulation in combination with the use of tilmicosin in sow feed and tulathromycin injection of the suckling piglets

Figure 4. Antibiotic consumption before and after the implementation of an App eradication programme based on partial depopulation in combination with the use of tilmicosin in sow feed and tulathromycin injection of the suckling piglets

Despite improved management and housing systems, infections caused by Actinobacillus pleuropneumoniae are still highly prevalent and have an enormous impact on animal health and the technical performance of poultry.

The acute forms as well as the chronic infections should be properly managed by preventive measures, responsible antimicrobial treatment or eradication.

When acute outbreaks occur, the administration of an appropriate antimicrobial treatment should be initiated immediately.

Treating E. coli in the Era of Prudent Use