reading time
Feed processing can destroy a lot of enzyme activity. To overcome this, coated enzymes have been developed, but this is expensive and does not always provide sufficient protection. Adding enzymes as liquids via post pelleting liquid application (PPLA) systems avoids this loss of enzyme activity. However, using liquid enzymes brings some new challenges, like the liquid enzymes having a short shelf-life and lower storage stability than dry enzymes. Also, the packing and transporting of liquid enzymes in bulk containers requires cooled storage and transport. This transport has a high carbon footprint, becoming increasingly important these days in the context of climate change.

Working with liquid enzymes packed in IBCs has many downsides as enzymes in liquid form tend to be less stable than dry enzymes (Figure 1).

Figure 1. Decrease in stability of liquid phytases stored in IBCs at 40 oC indicating the need for cooling

It can be seen that the activity of bulk liquid phytase decreased on average by 47% when stored for 12 weeks at 40 oC. Therefore, IBCs with liquid enzyme require temperature controlled storage space and cooled transport. Additionally, IBCs take up floor space and handling often requires extra labour and results in leakage or spillage. It also makes more sense to mix the enzyme power on site and in-line, instead of shipping the liquid enzymes (with around 95% water) over long distances.

The development by Huvepharma of instant water soluble enzyme powders (WSP) like Hostazym X WSP, OptiPhos WSP and Hostazym P WSP has opened the way to producing liquid enzymes on-site and in-line at the feed mill as required (Figure 2). These dry WSP enzymes are packed in boxes containing 4 aluminium sealed bags of 5 kg each. One box of 20 kg containing 4 x 5 kg of WSP enzymes can replace two or three 1,000 litre IBCs filled with liquid enzymes. 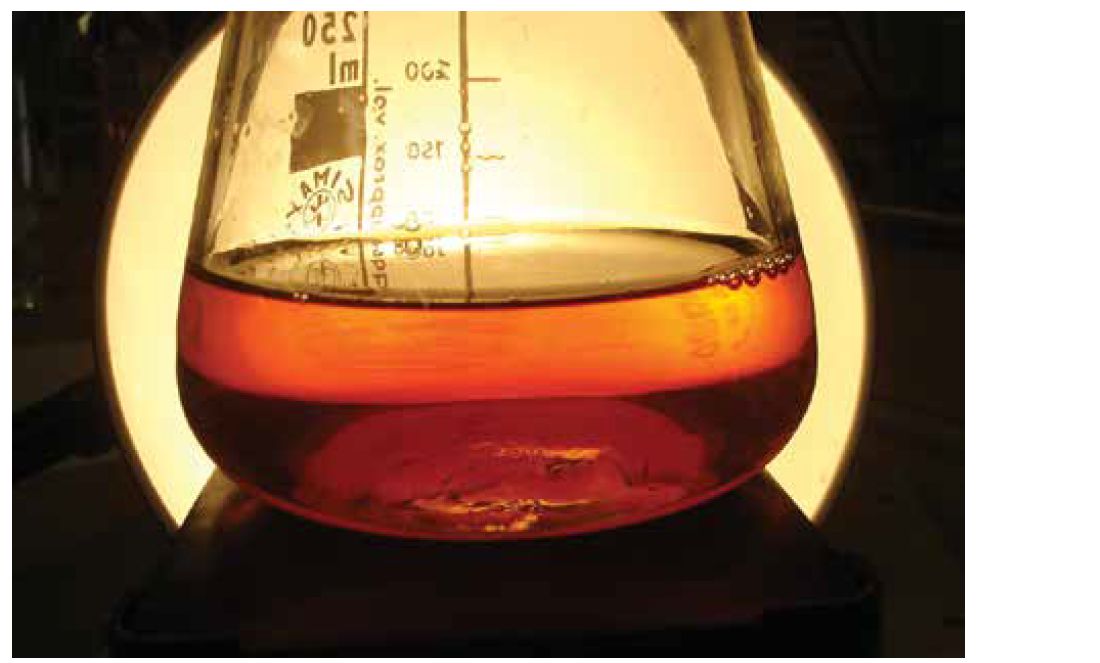 With these WSP enzymes, liquid enzymes can be tailor made at the feed mill in any desired amount and concentration just prior to application with the PPLA. For dissolving WSP enzymes, the Huvematic has been developed (Figure 3) which allows the enzymes to be dissolved even in cold and hard water.

The Huvematic accurately weighs the required quantities of WSP enzymes and water, and mixes them together so the liquid enzyme is produced at the right concentration in-line. Two enzymes can be produced at the same time (e.g. a phytase and an NSPase) and the Huvematic has enough production capacity to serve multiple PPLA lines in the same feed mill. 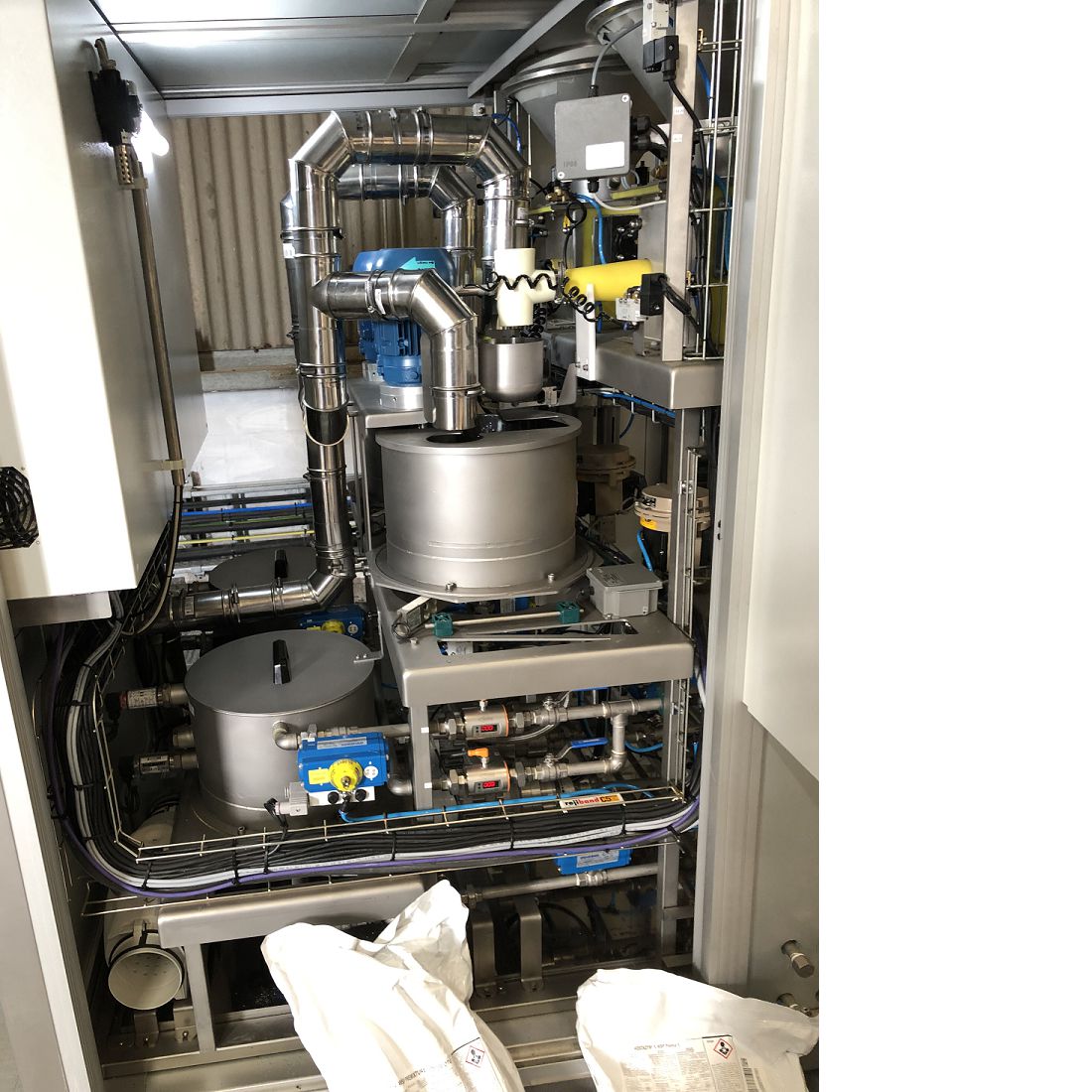 Already used in the US

This recent innovation by Huvepharma is new in most areas of the world. However, it has already become common practice in the US where it was intensively tested for 3 years. Large broiler integrators in the US have embraced this technology to avoid inconveniences related to liquid enzymes in IBCs. The concept was initially used in the US for the use of a liquefied phytase (OptiPhos) and led to the installation of the Huvematic in multiple feed mills.

Due to its success, Huvepharma extended the concept for the production and application of liquefied NSPase (Hostazym X) using the same formulation technology developed in the R&D laboratories.

Huvematic and the WSP enzymes were officially launched in 2014. Recently, country registrations of the WSP enzymes have been achieved in India, Bangladesh, Thailand, Vietnam, Mexico, Brazil and even more countries, and Huvematic machines have been installed and operational for a number of years. Other countries will follow soon, in particular when the Huvematic concept is desired by local feed mills.

This concept has been enthusiastically welcomed in all climate zones and also in the hot and humid climates in much of Asia, solving the difficulties with IBC containers regarding stability, activity and extra labour. At the same time, partners have been established to support Huvepharma with installation and maintenance of equipment (Huvematic/PPLA) and related technical support allowing the implementation of the Huvematic concept in large poultry integrators.

WSP enzymes are a unique tool for the production of liquid enzymes on site, offering the nutritionist flexibility and security in formulation. Avoiding the need for IBCs reduces waste, spoilage, labour costs and saves on the environment. This concept has now been implemented worldwide for several years and provides a solid base of commercial experience for future new users.

Hostazym® X is a unique and highly efficient fibre degrading enzymatic complex, with proven efficacy in increasing the nutrient digestibility of animal diets, resulting in better zootechnical performance and contributing to a healthier gut environment.

OptiPhos® is the fastest and most effective phytase on the market, giving the highest phosphorus matrix values and the highest savings on the cost of inorganic phosphate sources while minimizing environmental impact. Faster elimination of phytate also improves technical performance, with superdosing effects already observed at double dose.

Hostazym® X and the Meaning of "Stable at Normal Pelleting Conditions"

The Value of Intrinsic Thermostability in Your Phytase

The Role of Calcium in Broiler Performance and Phosphorus Digestibility