Probiotics have many modes of action, all bringing benefits to boost turkey performance. Trials results show the significant performance improvements that supplementing your turkey diet with a probiotic such as B-Act® can bring.

Animal production has evolved over the years, due to continuous searching for improvements and greater efficiencies. In recent years this evolution has been heavily influenced by both public opinion and communal efforts, dealing with a variety of topics from animal welfare to general public health. As a result, the search for and development of alternative measures to support these changes has become more and more relevant.

Feed additives, especially those historically dubbed 'alternative', have their role to play. A good example of these alternative feed additives are probiotics, viable micro-organisms added to the feed or the drinking water to confer health benefits to the host, if administered in adequate amounts (FAO/WHO, 2002). As the supporting body of scientific work has gained more and more traction over the years, the relevance of this type of feed additive has increased for all poultry species alike - despite most work being conducted in chickens. However, using probiotics in turkey production should be considered standard practice as well, and with good reason.

It is important to realise that probiotics are not a new concept: applying viable micro-organisms to confer health benefits to the host is a practice dating back to ancient times, although initially only in humans and without much knowledge of the underlying mechanisms. In the last century, the shift from human to agricultural use has accelerated in accordance with the increased scientific interest in the topic.

Another reason for their use is the massive potential probiotics hold as a concept, as the modes of action have been shown to vary; all of the following are proven modes of action, depending on which bacterial species is examined (Elshaghabee et al., 2017; FAO, 2016).

Recent research has indicated that the impact of probiotics can go beyond health benefits for the host, for example supporting food safety via Salmonella mitigation. As such, the term probiotics covers a very broad range of beneficial microorganisms with varying benefits, complicating matters when it comes to choosing the right probiotic for each situation in question. 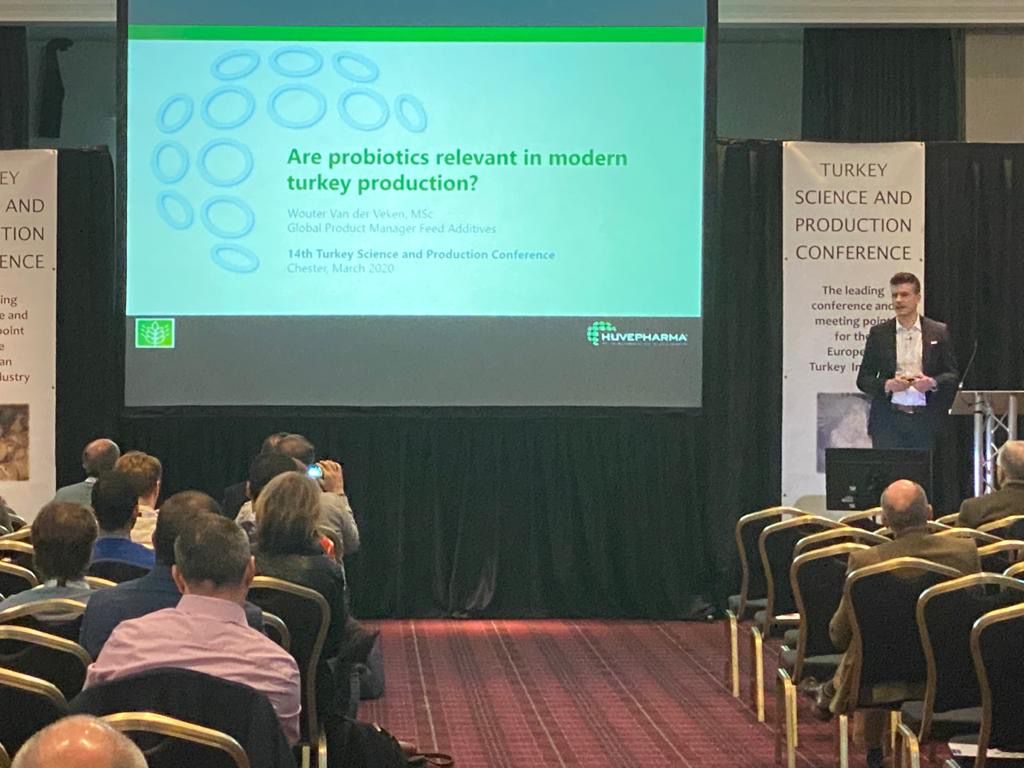 Luckily, there are some easy-to-remember scientific arguments which can help to determine which probiotic should be applied:

Although not definitive, the factors above can help to make more sense of the current probiotic market, especially if the products are supported with proper scientific research. An example of a well-known and well-researched genus of probiotics is Bacillus, which has a long usage history in livestock, supporting the health and functioning of the gastrointestinal tract (Elshaghabee et al., 2017).

One species of this genus in particular, Bacillus licheniformis, is of special interest for use in poultry: certain strains of the species have been shown to be antagonistic towards Clostridium perfringens, both in vivo and in vitro, whilst also supporting growth performance (Barbosa et al., 2005; Mingmongsolchai and Panbangred, 2018; Simon et al., 2001; Xu et al., 2018).

The mode of action of B. licheniformis can be considered multifactorial, based on the concept of competitive exclusion. This entails not only the direct and indirect competition for nutrients and physical attachement sites in the gut, but also the production of antimicrobial compounds and enhancement of immune system activity - or a combination of those modes of action (Bernardeau et al., 2017; Caly et al., 2015; Deng et al., 2012; Dischinger et al., 2009).

Based on this research, strains of the probiotic species were selected and examined further, resulting in B. licheniformis DSM 28710 as the most interesting candidate. This strain has been recently commercialised as B-Act® (Huvepharma®), a single-strain probiotic product, containing viable B. licheniformis spores. The formulation is marketed globallly, including under European registration for use in turkeys (EFSA, 2016; 2019), with an effective dose of 1.6 x 109 CFU per kg feed. 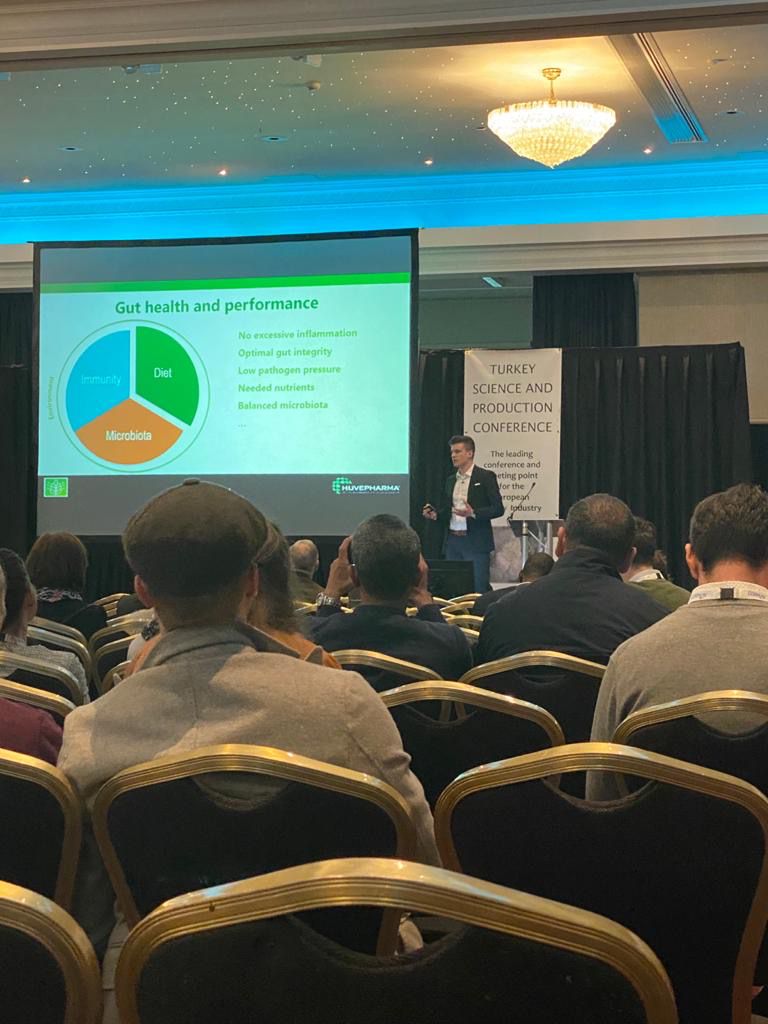 Although trial results from other poultry species have their value to indicate potential efficacy in turkeys, it was essential to evaluate Bacillus licheniformis DSM 28710 in dedicated in vivo turkey trials. To determine the effect of the probiotic on the gut microbiota, two treatment groups were set up at a commercial turkey farm in Germany, with a trial duration of 64 days. In total, 23,300 14-day-old BUT Big 6 male turkeys were used, equally divided over two houses on the same farm. One of these houses functioned as the control, receiving a combination probiotic (Bacillus spp.) in their basal diet. The animals in the second house also received a basal diet but supplemented with 0.5 kg B-Act®/mton of feed (1.6 x 1012 CFU Bacillus licheniformis/mton of feed). Probiotic supplementation was incorporated for the duration of the trial, following a three-phase feeding system (starter from day 0 to 9, grower from day 9 to 32 and finisher from day 32 to 64). On day 57, ten caecal samples were taken and analysed for Escherichia coli, Clostridium perfringens and Enterococcus faecalis. The effect of B-Act® supplementation on important pathogens in the microbiota was in line with expectations, as all three examined bacteria were strongly reduced by B-Act®. Expressed in log10 CFU/g caecal sample and compared to the control, E. coli decreased from 6.08 to 5.45, C. perfringens from 5.99 to 4.63 and E. faecalis from 6.18 to 0.

Although significant effects on microbiota composition are a great way to evaluate a probiotic, in commercial turkey production units it is the impact on production efficiency that counts. As such , trials focusing on growth performance are unmissable. A first trial in this regard was carried out by Centro de Ricerche per La Zootecnia e L'ambiente (CERZOO, Italy) using 336 male BUT Big 6 turkeys (average body weight of 62.5 g at the start) for an 84-day trial. The animals were divided over 18 pens per treatment (8 to 10 animals per pen) and vaccinated against Newcastle disease on day 21.

A similar trial was set up at the Olsztyn University of Warmia and Mazury, Poland, dividing 1,300 one-day-old female Hybrid Converter turkeys over 13 replicates per treatment, with each replicate consisting of 50 birds. There were two treatments, over the trial duration of 84 days; a control group fed a basal diet with no probiotic supplementation, and a B-Act® group fed the same basal diet supplemented with 0.5 kg B-Act®/mton of feed (1.6 x 1012 CFU Bacillus licheniformis/mton of feed). The basal diet was based on wheat, barley, rye, triticale, soybean and rapeseed meal, fed in three phases (started d1-28, grower d29-56 and finisher d57-84). Body weight (BW) and feed intake (FI) were recorded on d0, d28, d56 and d84, from which ADG and feed conversion ratio (FCR) were calculated. For the whole study period (d0-84), FCR and ADG significantly improved in the B-Act® treatment group compared to the control group: 2.38 vs. 2.33 (FCR) and 94.0 g vs. 95.9 g (ADG, p < 0.05). As a result, final BW was significantly higher in the B-Act® treatment group, with an average final BW of 8.12 kg compared to the control group at 7.95 kg (p < 0.05, d84). This was achieved without a significantly increased feed intake, highlighting the positive effect of B-Act® on feed utilisation efficiency and the expected improved return on investment.

Probiotics have earned their place in good standard feed practice, delivering benefits such as improved growth performance and pathogen mitigation. Although the main focus of research in poultry has been on chickens, turkeys can undoubtedly benefit as well. There are multiple probiotic products avilable, potentially complicating the right choice. Luckily, some scientific arguments can be kept in mind to aid the decision making process. The right probiotic should be applied in a situation where it can make a difference, either via the feed or the drinking water, with ample scientific research supporting the specific strain. Keeping this in mind, turkey producers can benefit from the available research, supporting their animals and production efficacy further.

This paper was originally delivered at Turkey Times, 4-6 March 2020, UK. References are available on request.

Huvepharma® Held its 5th European Seminar: Insights Into The Nutrition and Health of High Performing Animals