Necrotic Enteritis in Pigs - The Disease

Necrotic enteritis (NE) in pigs can lead to significant economic losses on pig farms due to mortality rates up to 100%. The infection is caused by Clostridium perfringens (CP) and is highly prevalent in pig herds worldwide. Figures 1-4 show images from pigs affected by NE.

C. perfringens can persist on pig farms over long time periods. Long-term management strategies need to be established to control NE in affected herds effectively. This includes sows before farrowing and during lactation, and pigs post-weaning. Sows / gilts are considered as important CP carriers despite there often being no clinical or bacteriological symptoms. Faeces from carrier sows and a contaminated farrowing environment are likely sources of exposure for piglets.

The pathogen and its pathogenesis

Clostridium perfringens is a widespread pathogenic bacterium associated with a broad range of clinical symptoms in pigs, from low grade scour to life-threatening clostridial enterotoxaemia.

Intensive proliferation and multiplication of CP in the intestine coupled with toxin secretion is the main feature of the infection. The location of clostridial infections is the jejunum but the ileum and colon can also be affected. Necrotic enteritis infection can spread rapidly throughout a herd.

CP organisms are ingested orally. Conditions that favour proliferation include the absence of acid in the stomach and the presence of antitrypsin factor. CP toxins are eliminated by trypsin.

The clostridia proliferate in the intestine, attach to epithelial cells, and produce necrotising (alpha, beta) toxins that cause necrosis and desquamation of epithelial cells, accompanied by haemorrhage and severe inflammation. Gas can be produced which may accumulate in the lumen and intestinal wall (intestinal emphysema; Figures 3 and 4). Death is a consequence of mucosal necrosis and the systemic effect of CP toxins.

Clinical signs produced by CP depend on the infectious dose, the strain virulence, and the quantity of antitoxin immunity. Most NE outbreaks are acute and occur in young piglets with high mortality rates. In uncomplicated cases of infection in neonatal and weaned pigs, morbidity is generally low. Chronic cases may be observed in pigs up to several weeks old. Despite the high prevalence of the disease worldwide, incidence levels in individual countries can vary greatly.

An acute short course with high morbidity with red coloured intestines filled with bloody content is suggestive for the pre-acute / acute form of NE. In the case of the sub-acute / chronic form of NE, the infections are milder and non-bloody diarrhoea is seen with lower mortality.

Definite diagnosis is confirmed by smear staining the intestinal contents and identification of large numbers of rod-shaped C. perfringens bacteria (Figure 5) in anaerobic cultures. Where faeces samples are transported to the laboratory, transport media for anaerobes (e.g., Amies transport medium) is recommended.

PCR testing is used to identify the different clostridial genotypes (C and A) and the genes responsible for creating various toxins produced by CP strains.

Regarding differential diagnosis, E. coli, Rotavirus and Isospora suis need to be ruled out.

Control and treatment of NE

Prevention: Vaccination of gilts and sows before farrowing is recommended in herds with recurrent Clostridium perfringens problems. Failure of piglets to receive adequate amounts of protective antibodies via colostrum and milk are reported. CP toxins are trypsin sensitive and are therefore eliminated by trypsin. Trypsin secretion deficiencies in piglets and the colostral trypsin inhibitor are considered as factors which contribute to such NE outbreaks and disease re-occurences despite gilt and sow immunisation.

Gilts often develop insufficient protective colostral antibody levels in contrast to multiparous sows. Piglets from vaccinated gilts are therefore at higher risk of developing NE, once CP is ingested shortly after birth. No cross-protection on all CP strains is provided based on commercially available NE vaccines.

Metaphylactic administration of a CP-effective antibiotic is often successful in significantly reducing the infection pressure and the risk of NE outbreaks.

Pharmasin® / Tylovet® achieves high concentrations of tylosin in the intestine of pigs after feed and water administration.

In pharmacokinetic studies following oral administration, similar tylosin concentrations in the colon were achieved by in-feed and water administration at the same dose levels. As shown in Figure 6, tylosin colon content concentrations (CCC) following Pharmasin® / Tylovet® oral administration at a therapeutic dose exceeded the MIC values of all tested Clostridium perfringens strains from Brazil and 85% of the tested C. perfringens strains from Italy. 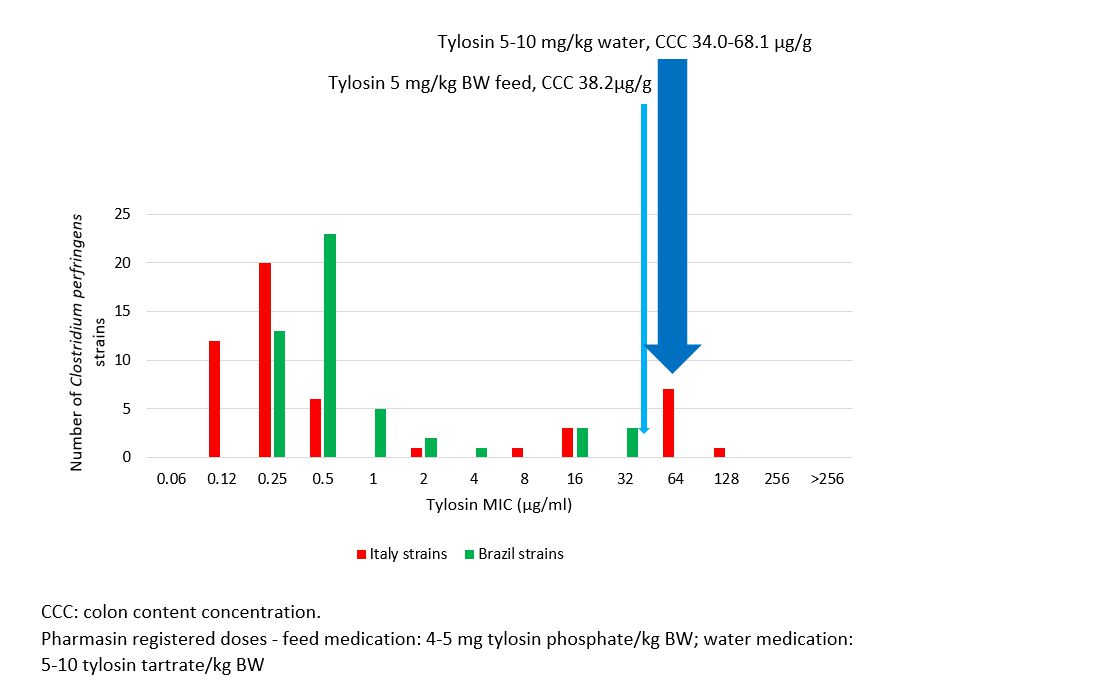 Figure 6. Tylosin MIC ranges for Clostridium perfringens strains from Italy and Brazil and the pharmacokinetic / pharmacodynamic relationships based on feed and water medication

Necrotic enteritis associated with Clostridium perfringens occurs in pigs in different clinical forms and is variable in its prevalence and severity.

Antibiotic use effectively prevents the overgrowth of pathogenic CP strains in the intestine and the start of the NE disease cascade.

Tylosin phosphate and tylosin tartrate accumulate in the pig intestine and provide bacteriostatic action against CP at therapeutic doses.

Tylosin (Pharmasin® / Tylovet®) concentrations in the colon, achieved by in-feed and water medication, are high and exceed the tylosin MIC values in the vast majority of the Clostridium perfringens strains.

An effective therapeutic effect of Pharmasin® / Tylovet® Premix and water-soluble granules on NE can be expected based on the available PK/PD data.

Tylovet® is our tylosin product. Typically supplied as a phosphate for use in premixes, a tartrate for water solubles and a base for the injectable form.

Treating E. coli in the Era of Prudent Use

Miya-Gold®, A Tool for Salmonella Control in Fattening Pig Units